Khentrul Lodrö T’hayé Rinpoche is a Tibetan monk and director of Katog Choling, a nonprofit organization based in the United States. Khentrul Rinpoche oversees more than twenty practice groups across North America and in China, Australia, and South Africa, as well as a large retreat center in the mountains of northwest Arkansas. He is also the abbot of Katog Mardo Tashi Choling, in Tibet, where his family, named “Gonpa-tsang,” has overseen the monastery for several generations. There he has established a Buddhist university, a three-year retreat center, a primary school, and a number of community outreach programs. Khentrul Rinpoche’s principal root guru was His Holiness Jigme Phuntsok Rinpoche. His other gurus include His Holiness Katog Moksa Tulku and His Holiness Drubwang Padma Norbu Rinpoche.

Khentrul Rinpoche is one of very few people in the world to hold three khenpo degrees – the equivalent of three PhDs—in Buddhist philosophy. Two of his degrees were awarded by the “Ivy Leagues” of Nyingma Buddhist universities – Larung Gar in Tibet and Namdrol Ling in India. His third khenpo degree is from Katog Monastery, the mother monastery of the Katog lineage. During the course of Khentrul Rinpoche’s extensive Buddhist education, he also took full ordination as a monk and spent several years in solitary retreat. Since coming to the United States in 2002,  Rinpoche has studied the English language in order to communicate with students and to supervise and collaborate on translation projects of Buddhist texts.

Rinpoche combines his profound knowledge of the Buddhist canon with an equally extensive capacity for presenting information with simplicity and clarity. He is an expert at extracting the meaning of a teaching, conveying it concisely, and supporting it with both logic and kindhearted humor. Although he has a vast scope of expertise and can teach on any esoteric philosophical treatise, including those that are the most scholastically complex, he emphasizes mind training (lojong). This is because he has always held the approach of love, compassion, and applicable wisdom to be the foundation of the path, and has found these techniques the most practical for taming the modern mind. It is these practices he passes on to his students, like a lifeline, in these turbulent times.

Khentrul Lodrö T’hayé Rinpoche was born in Eastern Tibet in 1965, toward the end of the great famine during the Cultural Revolution. When Rinpoche was seven, he contracted a mysterious illness. In an effort to save his life, his parents took him to an old woman who, due to political oppression, could not reveal that she was a Buddhist nun. She offered healing prayers for Rinpoche, then secretly gave him refuge vows along with the “offering of hair” ceremony, which is the first formal step to becoming a Buddhist, including the first level of novice precepts.

Over the years, the political situation eased, and by the time Rinpoche was in his late teens, dharma teachings started to become available again. Rinpoche began to wear monk’s robes, which was not allowed before, and studied with the last generation of great masters who had received training prior to the Cultural Revolution. These masters demonstrated — by example — how to tame the mind and transform adversity in the face of enormous hardship.

Rinpoche’s uncle, Tertön Jigme Dorje, was the abbot of their family monastery, Katog Mardo Tashi Choling, and he took Rinpoche under his wing. As a teenager, Rinpoche studied the foundational teachings and practiced the principle dharma approaches called preliminaries (ngondro); yogic training using the channels and energies (tsalung); and Great Completeness meditation (Dzogchen). He also gained an in-depth understanding of the traditional ritual arts and ceremonies. He traveled the region reciting prayers for the local villagers in order to remove obstacles and difficulties, and he performed rites for the deceased.

Eventually Rinpoche yearned for a more formal education. He wanted to study Buddhist philosophy in greater depth than he was able to at his monastery, but his uncle was protective and did not want Rinpoche to leave his care. Driven by this great desire to expand his knowledge, in his late teens Rinpoche decided to run away. He and a friend left on foot in the middle of the night, then walked for weeks through rough, mountainous terrain to the remote mother monastery of his lineage, Katog Dorje Den, in southeastern Tibet. There, the head abbot, His Holiness (H.H.) Katog Moksa Rinpoche, accepted him as a student and enrolled him in their shedra, a traditional school for learning Buddhist philosophy. Rinpoche enthusiastically dove into his studies, but after a few years, it became apparent that his aptitude was much greater than the education available to him at Katog.

When he recognized Rinpoche’s potential, H.H. Moksa Rinpoche sent him to Larung Gar, the largest and most rigorous Buddhist university of the Nyingma lineage. There Khentrul Rinpoche met H.H. Jigme Phuntsog Rinpoche, the founding master of the university. Rinpoche gave him a personal recommendation letter from H.H. Moksa Rinpoche and was accepted into the university. Later, Jigme Phuntsog Rinpoche would become Khentrul Rinpoche’s root guru – that is, a teacher for whom the student feels complete trust and respect and who guides the student on the entire path to realize the true nature of mind.

At Larung Gar, Rinpoche was very poor and subsisted on alms for food, but he studied hard and slept only two or three hours a night in order to focus on his education. At such Buddhist universities, it is not possible to receive a degree by merely attending classes. Rinpoche had to demonstrate not only outstanding scholarship in the traditional texts, but also the wisdom that comes through diligent meditation practice. To this end, he spent more than a year in retreat in the midst of his studies. After about six years at Larung Gar, H.H. Jigme Phuntsok personally conducted Rinpoche’s scholastic tests and conferred upon him his first khenpo degree.

Upon receiving this degree, Rinpoche returned to his family monastery, where he spent several years teaching and established a school for higher philosophical studies [shedra]. H.H. Jigme Puntsog Rinpoche visited the monastery and officiated at its opening ceremonies. Although Khentrul Rinpoche was being groomed to become the abbot, he felt there was still more to learn and decided to pursue further studies. Not surprisingly, no one wanted him to leave, so once again he departed in secret.

This time Rinpoche went to Drepung, a monastery of the Gelugpa school in Lhasa, where he studied the Gradual Path (Lam Rim), debate, and a variety of philosophical treatises. After almost a year, he returned to his home monastery and continued teaching. Once again, however, he felt a deep urge to continue his studies elsewhere so about a year later, Rinpoche left for the third time without telling anyone and traveled to the Buddhist university associated with Namdroling Monastery in southern India. Although he enrolled as a student, soon he was asked to teach classes, as well. One day, about four years into his studies, a monk came to his room and told Rinpoche to report to the main temple. Upon his arrival there, Rinpoche learned that the head teacher and founder of the monastery, H.H. Penor Rinpoche, would bestow on him a second khenpo degree.

During his time in India, Rinpoche also went to a university in Varanasi, where he studied Sanskrit. In addition, he received multiple profound empowerments, such as the Nyingtik Yabzhi and other transmissions from masters including  H.H. Penor Rinpoche, H.H. Dodrubchen Rinpoche, and others.

Soon after receiving his second khenpo degree, Rinpoche decided to return to his family monastery in Tibet once again. Before he could do so, however, H.H. Penor Rinpoche sent him to Taiwan, where Rinpoche spent several months teaching at H.H. Penor Rinpoche’s centers before finally returning home. After a brief stay in his family monastery, Rinpoche continued on to Katog Monastery, where H.H. Moksa Rinpoche bestowed a third khenpo degree upon him, in acknowledgement of his academic and personal achievements.

Khentrul Rinpoche is one of the only khenpos in the world with three khenpo degrees –  equivalent to three PhDs in Buddhist philosophy. He received two of these degrees from the “Ivy Leagues” of Nyingma Buddhist Universities, Larung Gar in Tibet and Namdrol Ling in India. In addition to spending several years in retreat, he has received the entire Nyingtik lineage (including Nyingtik Yabzhi, Dzod Dun, Ngalso Khorsum, Yeshe Lama, and Chetzun Nyingtik), as well as many empowerments, scriptural transmissions, and explanations on the pith instructions for Great Perfection (Dzogchen) practice. Rinpoche has also received the rarely bestowed oral transmission of Khenpo Ngakchung’s Nyingtik lineage. From H.H. Jigme Phuntsok Rinpoche, H.H. Dodrubchen Rinpoche, H.H. Penor Rinpoche, and H.H. Katog Moksa,  he received all of the empowerments and scriptural transmissions for the Kama and Terma cycles of the Nyingma school, including the Treasury of Termas (Rinchen Terzod) and Treasury of Oral Instructions (Dam-ngak Dzod).

H.H. Katog Moksa Rinpoche enthroned Rinpoche at Katog Dorje Den, the mother monastery of the Katog lineage in Tibet, as a tulku (a reincarnate master) of Drubtop Namkha Gyamtso, a renowned siddha of this lineage. In addition, he had also been recognized at a very young age by his uncle, Terton Jigme Droje, to be the reincarnation of Katog Chagtsa Tulku. Khentrul Rinpoche has never used his tulku recognition names, preferring to establish himself as a teacher through his own qualities of personal study, practice, and example. However, to create good interdependence, he has used the title Khentrul, which means both a khenpo and a tulku.

Rinpoche now directs Katog Choling, a nonprofit Tibetan cultural center based in the United States, and oversees more than twenty practice groups across North America, in Australia, and in South Africa. He regularly teaches seminars, leads meditation retreats, and gives public talks at universities, schools, prisons, churches, and other institutions. He continues to serve as one of the principal abbots of Mardo Tashi Choling monastery in Tibet, where he established a Buddhist University, a three-year retreat center, a primary school, and other community outreach programs.

For more information about Khentrul Rinpoche’s current activities, such as in Mardo Tashi Choling, Katog Choling, and other projects, please visit Welcome to Katog Choling. 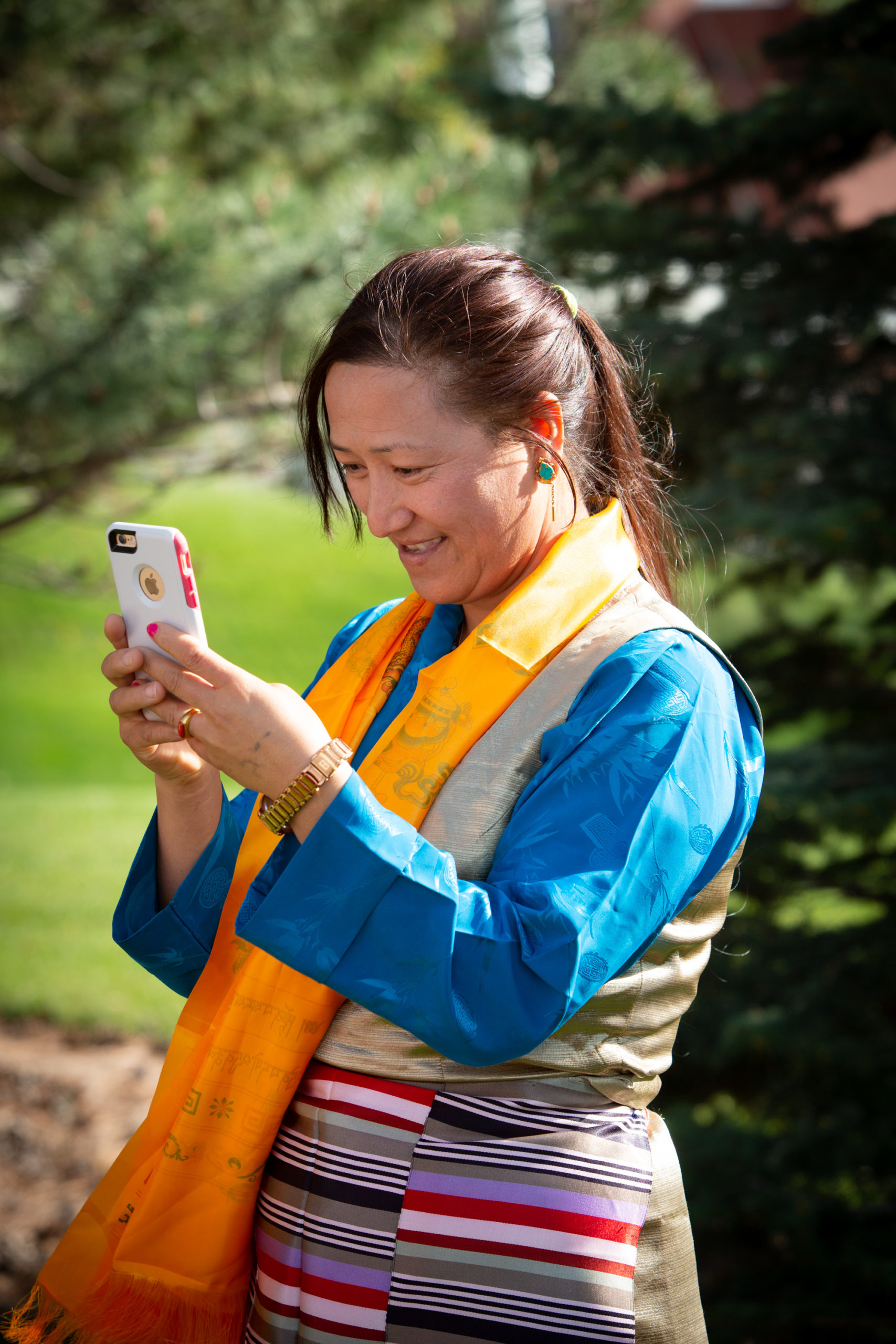 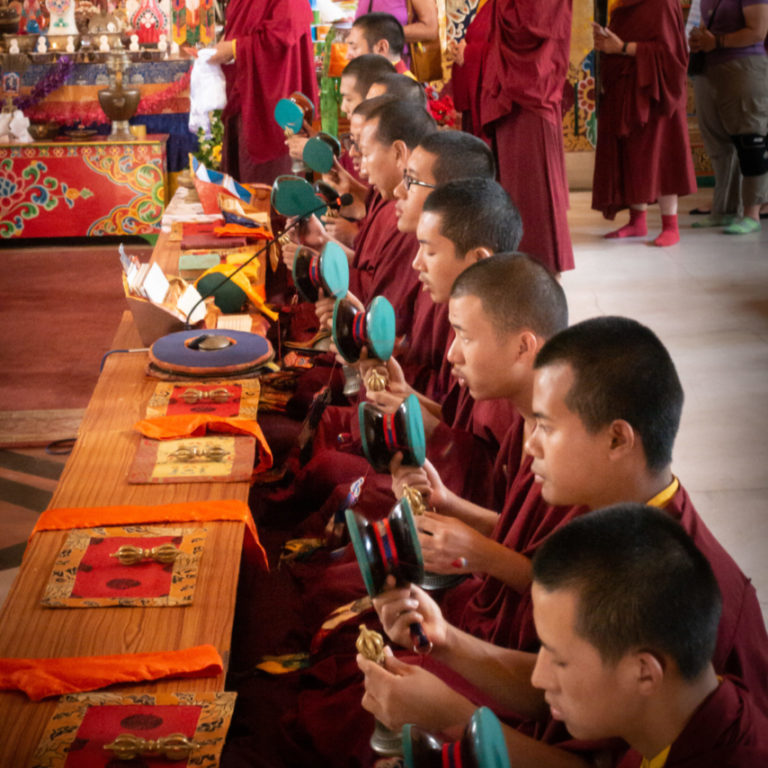 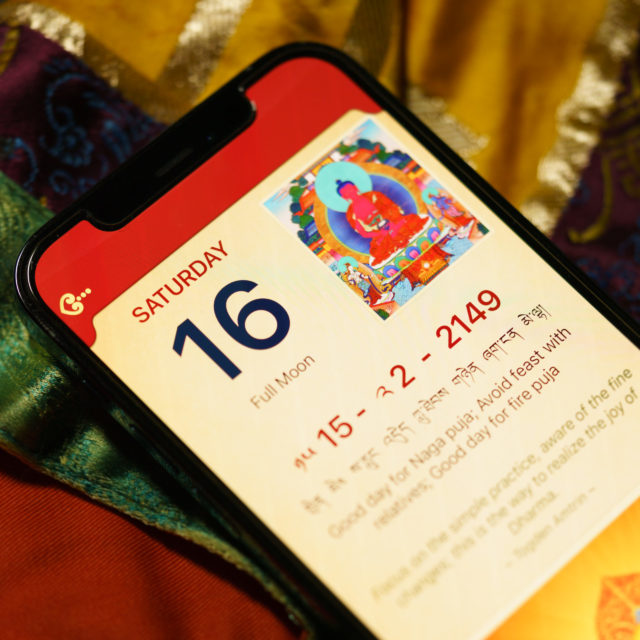 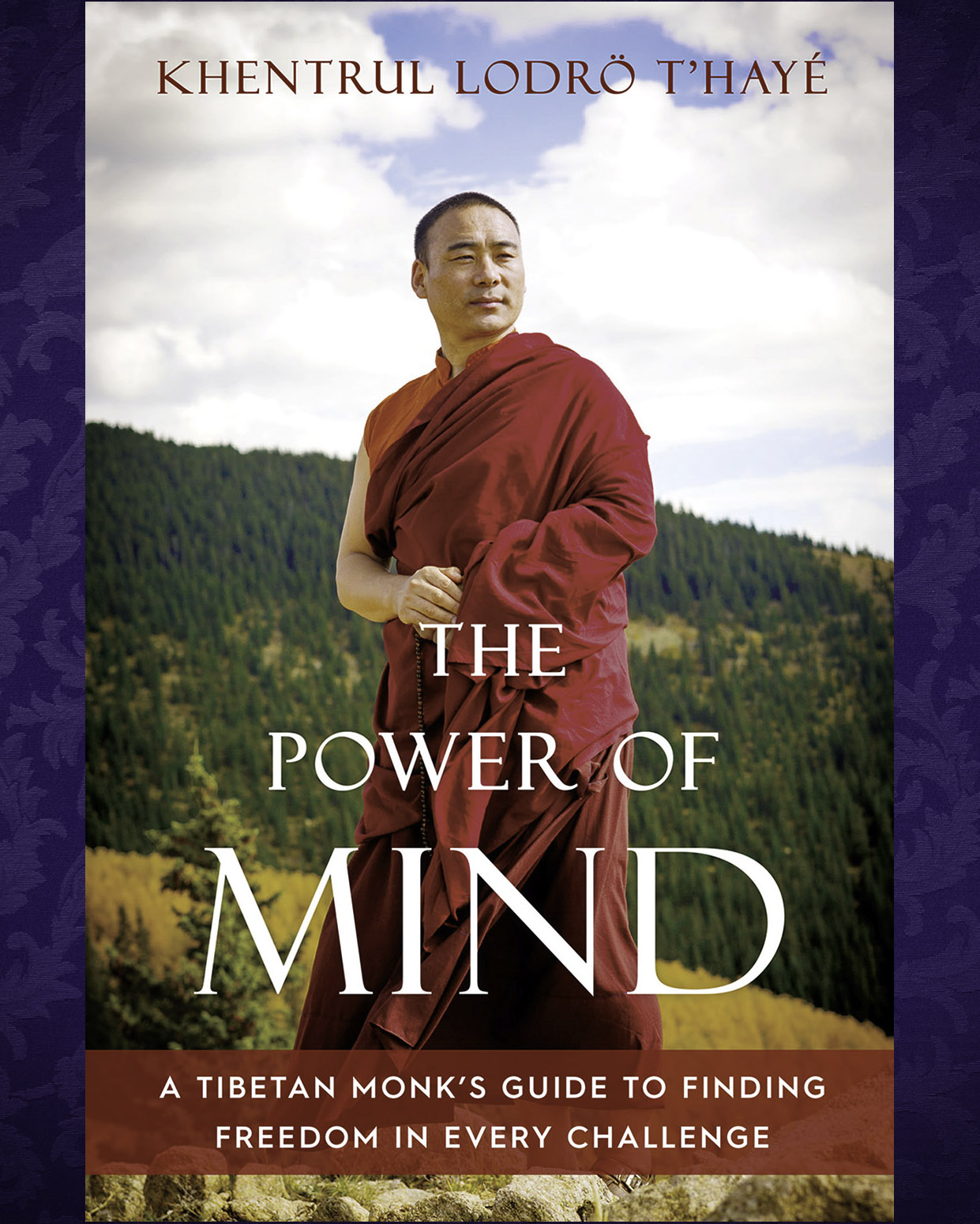